Official Results for Division B and Division C

Rank order for Division B and Division C

Top 6 Places for Division B

Red Carpet Backdrop Pics for all winners of the 46 regular and 4 Trial events - Please follow these instructions for your official pics! Once you have received your medal for places 1-6 in regular events and 1-3 in Trial Events, please exit Stage Right and proceed to the Red Carpet Backdrop with Science Olympiad and Cornell logos. You'll be given a sign to mark your event and all 6, 12 or 18 students will pose for a fun group shot taken by a professional photographer. For special awards and team trophies in places 1-10, all students will remain on stage for an official photo. Just like always, parents and friends - don't rush the stage or Red Carpet for pics! All posted on our Facebook Page now!

Opening and Closing Ceremony Livestream Link - Friday, May 31 and Saturday, June 1. Find the Closing on the Science Olympiad TV YouTube Page and the Opening on Facebook.

To celebrate the 35th Anniversary of the Science Olympiad National Tournament, Science Olympiad is honoring the three founders of the national non-profit organization (Dr. Gerard Putz, Sharon Putz and Jack Cairns) by providing four outstanding student participants each with a one-time, non-renewable $10,000 scholarship to the college of their choice. Students will be asked to demonstrate how Science Olympiad has impacted their choice of college and career, and how they are using their gifts to impact the community and do good in the world.

The short, three-answer online application is open ONLY to the 15 Division C high school students per team who are competing at the 2019 Science Olympiad National Tournament. Due Wednesday, May 15, 2019 at 11:59pm CST. - Winners announced Saturday, June 1!

2019 National Tournament Prize List - Science Olympiad is grateful to our sponsors and partners, who support the achievement of our Science Olympiad competitors by awarding fantastic prizes, cash scholarships and student and professional development opportunities. See the list for more than $250,000 in prizes and an additional $1.1M from the Milwaukee School of Engineering for Protein Modeling participants. - Winners List! 6/7/19

Lockheed Martin Spirit Awards - One Division B and one Division C team each year are honored with this $2,000 award bestowed upon the team that best exempifies good sportsmanship, team collaboration and school spirit. Event supervisors will privately nominate teams based on their participation in each event, so be at your best at all times! You never know who's watching when you do a good deed, congratulate another team, or help a fellow competitor.

Lockheed Martin Coaching Excellence Awards Nomination Form for 2019 National-Bound Coaches - One coach per team may fill out this form to win one of four (4) expenses-paid trips to the Science Olympiad Summer Institute in Phoenix, Arizona, July 15-19, 2019. Bring your completed form to Registration at the National Tournament, or fill out a copy available at Registration (one form per team in each Coaches Registration Box/Packet).

NEW SCHOLARSHIP! Audition to be "The Next ACE Hardware Science Star!" at the ACE Hardware Science booth Friday, May 31 from 10am to 2pm at the STEM Expo in the Physical Sciences Building - Steve Jacobs of Mr. Wizard and Mythbusters fame will be on hand to virtually direct students through a short video audition using hardware props. Special Guest Dr. Mitchell Batoff, retired professor from New Jersey, will be present to share his vast knowledge of Fermi Questions with competitors. Five winners will be chosen. The single Grand Prize Student Winner will receive a $2,000 college scholarship (held in escrow until college enrollment; then paid directly to the college). All five winners will receive $250 each for their Science Olympiad teams and a Bose SoundLink II Bluetooth remote speaker! Winners will be notified via email post-tournament through their Science Olympiad coach. Must be a varsity Div. B or Div. C Science Olympiad team member to participate. Registration forms available at the booth or pre-fill here.

Featured Fundraiser! Want to raise funds for your trip to nationals and keep 50% of the revenue? DoubleGood gourmet popcorn makes the process easy, with pop-up stores you can manage on your phone. No going door-to-door or delivering product, just set up your fundraiser in the DoubleGood app and after the four-day selling window, the funds are yours. Recently featured on NBC's Today Show, DoubleGood is making a difference with its charitable foundation and plans to work with Elementary Science Olympiad to increase accessibility for students with disabilities. With flavors like Chi-Town Chow Down, In Queso Fire and It's Peanut Butter Chocolate Time, you might want to snag a bag for yourself!

State Team Numbers for the 2019 Science Olympiad National Tournament - Please note: in each state besides California that sends two teams, the higher first placing team is awarded the lower team number (so for New York Div. C, 1st place gets C1, 2nd place gets C2). For California, which is split into two sections, the section with the higher membership gets the lower team number. These numbers are posted around April 1. - Posted 4/2/19

At the end of the Science Olympiad National Tournament Awards Ceremony each team’s head coach will be provided one copy of the final scores. Within one hour after the ceremony is completed the head coach may submit compelling evidence of a scoring inconsistency using this Team Ranking Inquiry Form (will be a live link at the 2019 National Tournament). If the evidence is verified the appropriate points, medals and trophies will be awarded for that team only. Thinking that your team "did better" than scores reflect is not considered compelling evidence. Teams will not be asked to return awards or to relinquish any points. Scores for the Science Olympiad National Tournament are not official until they are posted on the soinc.org website. For more information about Science Olympiad Scoring, please visit our Policies section.

Note: The Science Olympiad FAQ and Rules Clarifications/Changes system will close at midnight roughly a week before the National Tournament, so be sure to submit your questions before that time.

In 2009, Board Members Dr. Gerard Putz and Jim Woodland traveled to Tokyo, Japan, to present Science Olympiad concepts to Japanese education officials from the Ministry of Education (MEXT) and the Japan Science and Technology Agency (JST) at "Science Agora." A partnership between Science Olympiad and JST was born, founded on a shared passion for making science competition fun and exciting for all students. In March 2019, JST hosted its 8th Annual Japan High School Science Championships (JHSSC), where the Grand Prize for Kaiyo Academy in the Aichi Prefecture is a trip to the 2019 Science Olympiad National Tournament at Cornell University. In 2015, the JHSSC added a Science Olympiad tradition to the contest, the ever-popular Swap Meet! As they did at the 2012-2018 National Tournaments, Japanese students will meet their American peers and participate as unranked guests in selected Science Olympiad events. Pictured: 2019 JHSSC Winners from Kaiyo Academy in Japan! 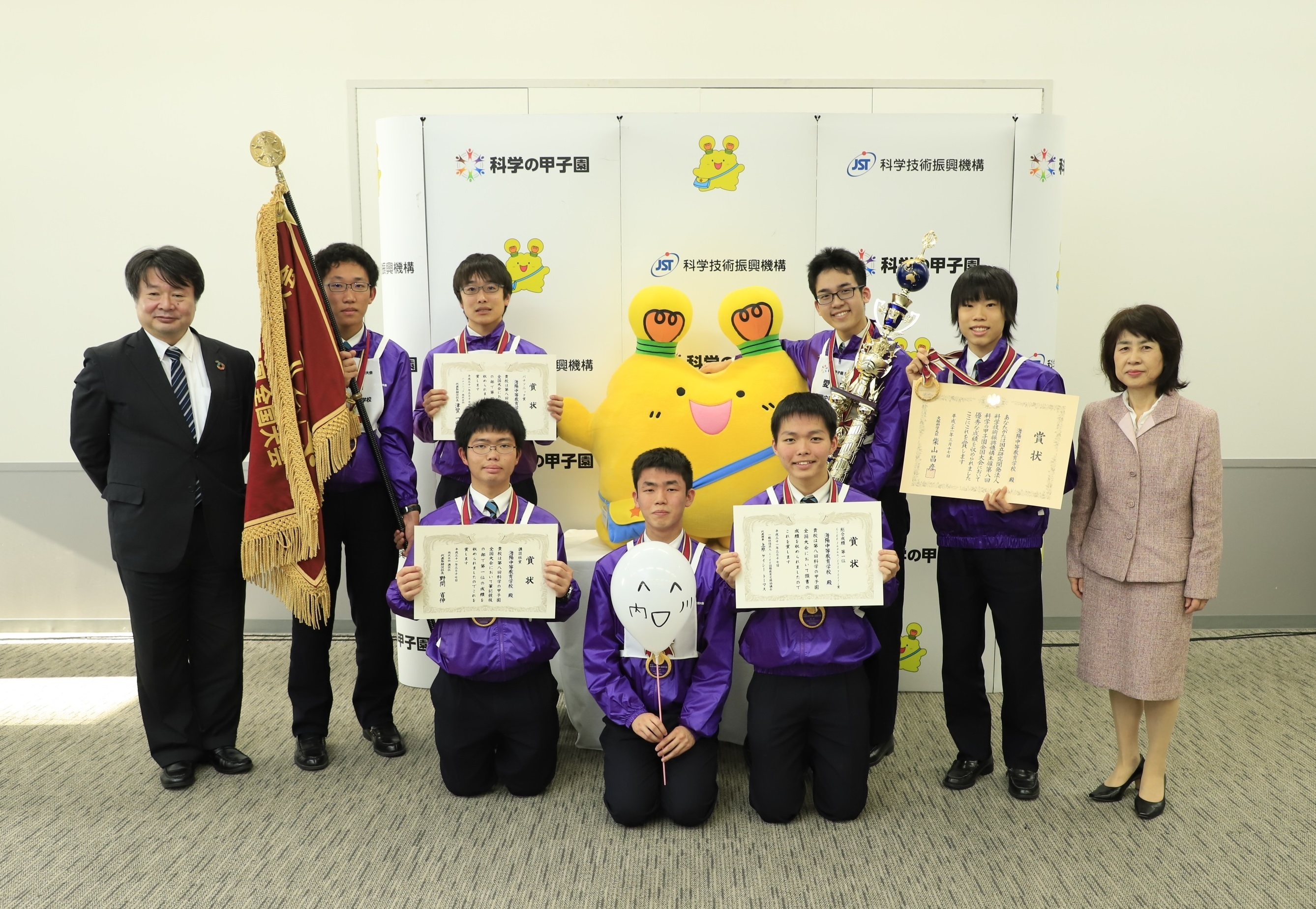