Lights, camera, action! Grade 6-8 kids entering the 3M Young Scientist Challenge have a chance to win $25,000! Upload a short video for a chance to compete in a live, head-to-head final at 3M Corporate Headquarters. Top 10 winners receive $1,000 each, everyone gets prizes and personalized mentoring from a 3M scientist. See the teacher letter and contest overview for more info. Teachers should encourage specific students and Science Olympiad team members to enter by presenting the Nomination Certificate below. This is an experience of a lifetime! 2023 Contest Due date: April 27, 2023! Enter NOW!

2023 suggested Thought Starters centered around improving life in the future via health, safety, mobility, community, the environment, and energy consumption innovation -- topics aligned to all 23 of the current Division B Science Olympiad events. Here's what you need to enter the 2023 Competition, in partnership with Discovery Education:

Check out the Top 10 Finalists in the 2021 Competition, announced 6/24/21! Seven of the 10 middle schools are Science Olympiad members! Congrats to Sarah Park from The Bolles School for winning the 2021 3M Young Scientist Challenge with her music therapy innovation. The second and third place winners came from Science Olympiad team schools: Samarth Mahapatra from Dodgen Middle School in Marietta, Georgia, and Snightha Mahanraj from Engineering and Science University Magnet in West Haven, Connecticut. Wow!

Check out the Top 10 Finalists in the 2020 Competition! Congrats to Anika Chebrolu of Nelson Middle School in Texas for winning the 2020 3M Young Scientists Challenge!

Another Science Olympiad School Winner! Kara Fan from Mesa Verde Middle School in San Diego wins $25,000 in the 2019 3M Young Scientist Challenge for her liquid bandage innovation! See more on Kara from the CBS Morning News and Women You Should Know.

The Top 3 Finalists all came from Science Olympiad team schools: Kara Fan, Caroline Crouchley from Garden City Middle School in Garden City, New York, and Jordan Prawira from Altamont Elementary in Mountain House, California! Other Science Olympiad program schools placed in the top 10 including Canton Charter Academy in Michigan, Harker Middle School in California and Community Middle School in New Jersey. Make sure to check out their inventions and watch for the 2020 competition challenge! The winner could be YOU! 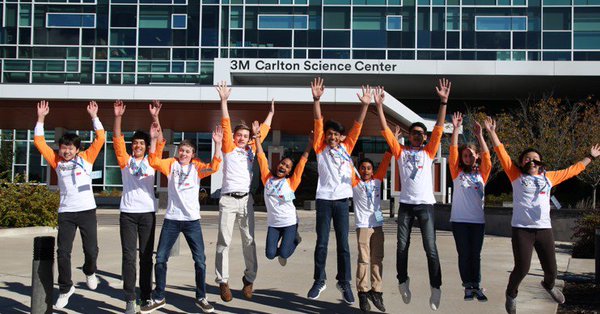 Congrats to all the 2017 Finalists and the winner, Gitanjali Rao from Colorado, who won for her rapid water-based lead detection mobile app. Four of Top 10 Finalists came from Science Olympiad team schools: Laalitya Acharya from Mason Middle School in Ohio, Austin Crouchley from Garden City Middle School in Connecticut, Allie Weber (follow her on Twitter at @robotmakergirl) from Edison Middle School in South Dakota and Devin Willis from Henderson University School in Florida. Their inventions are incredible and inspiring!

Congratulations to the 2010 Second Place Winner, Science Olympiad's Sydney Clark of the Clark Academy of Science and Art Homeschool in Texas! Sydney won $1,000, a trip to the set of MythBusters, an all-expenses-paid trip to New York City and a prize backpack.

Creative Division B Science Olympiad students entered the Discovery 3M Young Scientist Challenge (YSC) by May 27, 2010 for a chance to show the world their amazing science ideas in a 90-second video. Our special partnership allows all Division B teams advancing to the Science Olympiad State Tournament two nominations for automatic quarterfinal status and one guaranteed Science Olympiad spot in the Top 10!  The 2010 finals will again be held in New York City in October, with prizes including amazing trips and cash scholarships up to $25,000.

At the 2010 Science Olympiad National Tournament, middle school students were treated to an on-site movie studio, courtesy of Discovery YSC!  On the Friday before the tournament, top competitors from 60 schools were invited to film their own interpretations of solutions to a range of current science challenges. Cool!

In 2009, two Science Olympiad participants tied for 2nd place in the YSC Competition finals -- Nikita Guarav from Beaverton Valley Catholic School in Oregon and Nico Seamons Cottonwood Valley Charter School in New Mexico!  Congratulations to the other finalists in the Top Ten from HB duPont Middle School in Delaware and Northport Middle School in New York.

In 2008, three Science Olympians from IL, NJ and MN placed in the Top 10 and won $1,000 each, a trip to Washington, DC, and extras like a visit to San Francisco's Treasure Island to meet with Discovery engineers on "Prototype This".